Gathering feedback is a big part of Let’s Talk!, and hearing from customers regarding the service they received is an important piece.

Note: Feedback forms will not be sent to Customers who submitted anonymous Dialogues or who did not provide email addresses. If opt-out controls have been customized by the System Administrator, the User may see feedback form delivery as an option.

The Feedback Form (example below) includes a 10-point Likert scale on which Customers can rate their satisfaction or overall experience. Upon selecting a score, Customers may choose to provide further commentary in an open-ended text box. 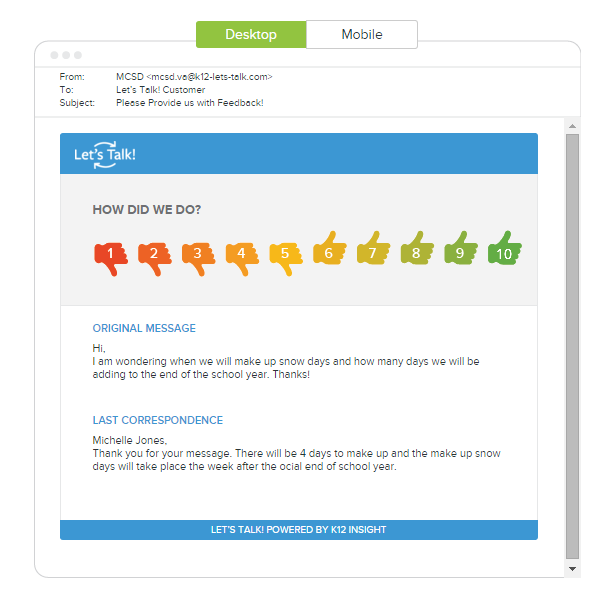 By default, Feedback Forms are delivered a few minutes after Dialogues are closed and responses have been sent. System Administrators may customize delivery of a Feedback Form to from 1 to 24 hours after a Dialogue has been closed.

By default, Customers will only receive one Feedback Form, the first time a Dialogue is closed, even if it is later re-opened. System Administrators may customize the account to allow Users to resend Feedback Forms and for Customers to resubmit scores after the district has provided additional information.

System Administrators can update Opt-Out, Delay, and Resubmission of Feedback Forms by selecting Feedback Form Template on the Settings menu.

Where Does the Data Go?

If a Customer chooses to complete the Feedback Form, the data from the form is captured in the Timeline of the original Dialogue within the Dialogue Details page. The score and additional commentary (if any) are displayed within the Timeline.

Score and Customer feedback, if provided, are captured in the Timeline.

The data from the Likert scale is also captured in the Closed Dialogues Inbox view through both the icon in the Feedback Score column and the Average Feedback Score measure in the Inbox Ticker in the top right-hand corner. 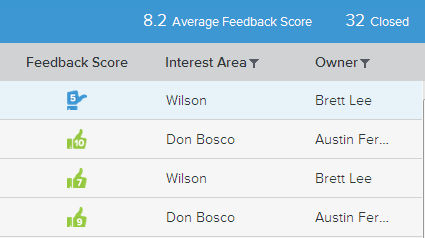 Customer feedback scores can be found in the Closed Dialogue filter.

We appreciate that you've taken the time to write us. We'll get back to you very soon.

Have a question or need help?

Reach out using this form. We're more than happy to assist you.